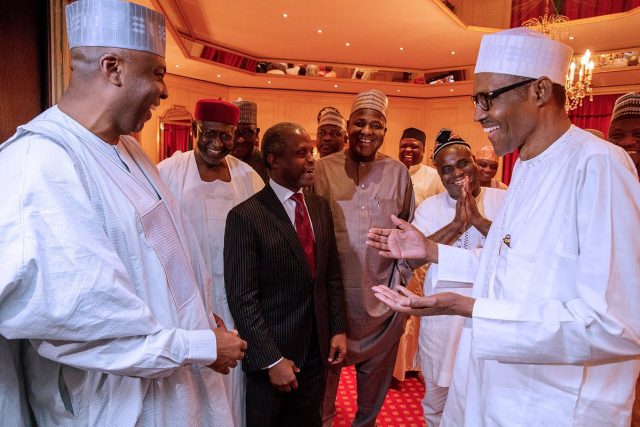 A light drama ensued at the Presidential Villa on Thursday night when Senate President Bukola Saraki and the Speaker of the House of Representatives, Yakubu Dogara, led members of the National Assembly leadership there for a meeting with President Muhammadu Buhari.

According to a source in the National Assembly who spoke to Channels Television,  some of the lawmakers were angered by the level of security screening they were subjected to and angrily opted to abandon the meeting.

According to reports, the leadership of the National Assembly was at the villa to discuss the 2018 budget with President Buhari.

Upon their arrival at the villa in a coaster bus, they were informed they would be subjected to checks including body searches.

Despite the setback, the meeting went on with the Senate President telling reporters afterwards that they had a fruitful discussion with President.

Asked whether they were barred from entering the Villa by security agents, the Senate President said the matter has been resolved, which is why they are with the President.

The Senate also said that the lawmakers would be back to visit the President in a few days.

After the meeting, President Buhari apologised for the mix-up. As the President, along with Vice President Yemi Osinbajo, saw the lawmakers off, there was a lot of laughter and no sign of the drama that preceded the meeting.