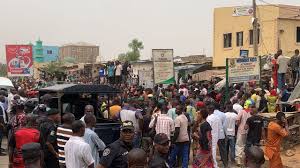 About three residents of Kano were killed while many are currently trapped in an explosion which rocked Sabongari in Fagge Local Government Area of the state.

Details of the incident are still sketchy, but residents told journalists that an explosive device went off in the early hours of the day.

One resident said a suicide bomber struck in the area, but News me cannot independently verify this.

It was learnt that  officials of the National Emergency Management Agency (NEMA) were seen packing what is suspected to be shattered body parts of the suspected suicide bomber.

A welder in front of Winners Schools, Kano, which is adjacent the scene, is reported to be among the casualties.

“The seller’s shop is on the ground floor of the building where the school is located. So, when the cylinder exploded, it brought down the building and the pupils got injured. There wasn’t a bomb blast,” he told journalists.

Commenting on the incident, the Kano state government debunked the reports that the explosion occurred in a school.

The state commissioner for information, Malam Muhammad Garba said the incident happened at an animal feed store opposite the school along Aba Road, Sabon Gari.

He said while the cause of the explosion and the damage it had done is yet to be officially ascertained, investigation has since commenced to determine the cause, impact and measures to be taken.

Malam Garba called on the people in the state, particularly those living in the area where the incident occurred, to remain calm while government in collaboration with relevant agencies are working on the matter.