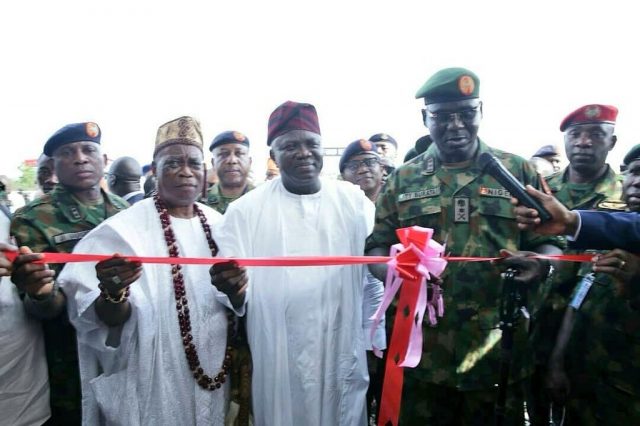 Lagos Governor,Akinwunmi Ambode on Monday described the security of lives and property of residents as the biggest achievement of his Administration in the last three years.

He said it was gratifying to note that the State is now the safest in Africa.

Speaking at the commissioning of a Forward Operating Base (FOB) of the Nigerian Army in Epe, Governor Ambode said the combined investment of his Administration in the security architecture of the State and efforts of security agencies had resulted in peaceful atmosphere for residents and visitors.

The Governor, who recalled the days of kidnapping, cultism and other security challenges in Ikorodu and Epe axis, said it was satisfying that the activities of criminal elements such as militants, among others had been confined to history in the State.

“As I mark my own three years in office, I can say significantly that if there is anything that I have actually achieved in these three years is the security and safety of lives and property in Lagos State.

“There is no way that could have been possible and that is why I say it quietly and openly if not for the support and cooperation of all the security agencies and most significantly the efforts of the Nigerian Army which is actually hidden underground but visibly seen by everything that is going on here,” he said.

Recalling his early days in office, the Governor said his first major task was how to address kidnapping and other nefarious activities perpetrated by militants in Ishawo axis, adding that a Military Base was eventually set up as well as Military Operation code-named “Operation Awatse.”

“At the beginning, the issue of kidnapping and cultism was actually in this eastern axis between Epe and Ikorodu but with the efforts that we have seen and visible to all of us, it has become a thing of the past and we are very grateful to the Nigerian Army.

“I want to quickly recollect that my first task was the issue of kidnapping that was so notorious in area of Ishawo in Ikorodu and there and then, we had the support of the Nigerian Army to set up a small base and we had to also take over property of some of those militants to accommodate the Military Base,” he recalled.
He said crime rate had drastically reduced in the State, and that no efforts would be spared in sustaining the peace in the State.

Besides, the Governor lauded the General Officer Commanding in charge of 81 Division of the Nigerian Army, Enobong Udoh for his steadfastness in promoting peace in the State, just as he reiterated commitment to continually support the Military and other security agencies in the State.

Governor Ambode also commended the new initiative by the Nigerian Army to promote human security alongside national security, saying the State Government was solidly behind any initiative aimed at ensuring unity of the country.

Earlier in his remarks, Chief of Army Staff, Tukur Buratai commended Governor Ambode for the support to security agencies and the massive infrastructural development across the length and breadth of the State, saying the initiatives of the Governor were laudable.