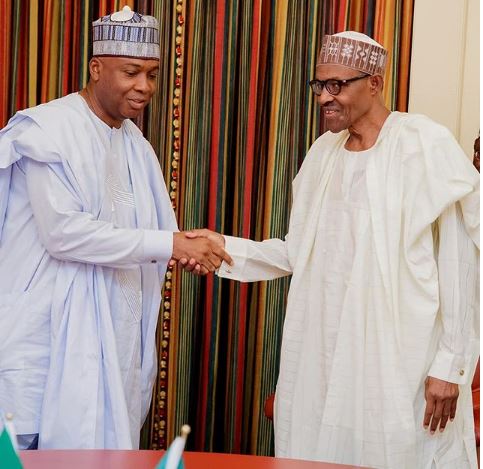 Senators appointed by their colleagues are currently meeting with Muhammadu Buhari, the President of Nigeria at the Presidential Villa, Abuja.

The lawmakers, led by Senate President, Bukola Saraki, were appointed by their colleagues to discuss with the President over the controversy surrounding the actions of the Inspector General of Police, Ibrahim Idris.

The Senate set up the nine-member committee last Wednesday after Saraki raised an allegation that Idris was trying to frame him in the handling of crime suspects arrested in Kwara.

Saraki had told his colleagues that the police chief transferred the suspects undergoing interrogation in Kwara State to Abuja to make statements to implicate the senate president, who is a former Kwara governor.

The police have since confirmed transferring the suspects, but cautioned Saraki not to jeopardise investigations.

Saraki’s allegation came days after Idris, for the third time, refused to honour summons by the Senate. The lawmakers invited the police chief to discuss the treatment meted on a senator, Dino Melaye, the Police, as well as the poor security situation across the country.