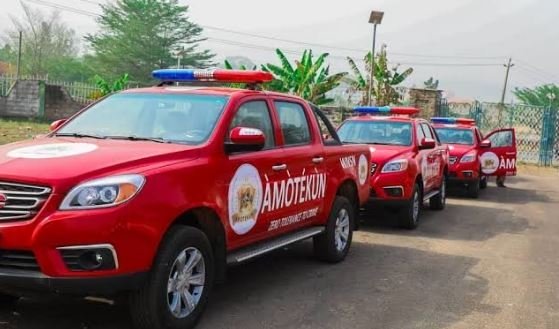 Ekiti State Governor, Dr Kayode Fayemi, has made an intimation that six South-West states might sign the Amotekun Bill into law latest on Friday.

The governor spoke in Ado Ekiti, the Ekiti State capital, while receiving the Ekiti State Amotekun Bill from the state Attorney General and Commissioner for Justice, Wale Fapohunda, and a team from the Ministry of Justice.

The governor, who hailed the Ekiti AG and his colleagues in the South-West states for the job, said, “My colleagues and I were still in discussion yesterday (Sunday) and we have promised ourselves that this will be given accelerated discussion in our various state executive councils this week and we will also send it expeditiously to our various houses of assembly this week.

“We are discussing with our speakers who have been waiting for this. Some of them are even recalling their members from recess in order to give this an accelerated passage in the various legislatures so that latest by Friday, February 14, the bill that hopefully would have been passed into law would be assented to simultaneously in the six states of the South-West.

“I hope that members of the Ekiti State Executive Council will give it expeditious treatment and we will be able to ensure that a team of the Commissioner for Regional Development, Ayodele Jinadu; and the Special Adviser on Security, Brig. Gen. Ebenezar Ogundana (retd), can immediately start the implementation phase of the Amotekun Corps.”

The governor, who disabused the minds of those that misconstrued the concept of Amotekun, described it as a logical extension of the community policing initiative of the Federal Government.

“It is about the safety and security of every person resident in the six states of the South-West, regardless of where they may have come from as long as they are legitimately living and resident in any part of the six states. We consider it our duty and responsibility to protect them as long as they are within our jurisdiction of responsibilities. Even though I have not read the bill, I am sure this is what this bill is about.

“The bill is not likely to propose an exclusive protection for Yoruba people living in the six states; it is going to talk about ensuring that our highways and bushes are free from banditry, armed robbery, of kidnapping, of all forms of brigandage and criminalities in our states.”

He added, “To that extent, it is a logical extension of the community policing initiative that the President, (Major General) Muhammadu Buhari (retd.) has assented to which the Inspector-General of Police, Mohammed Adamu, has already communicated to the various formations of the police force across Nigeria.”