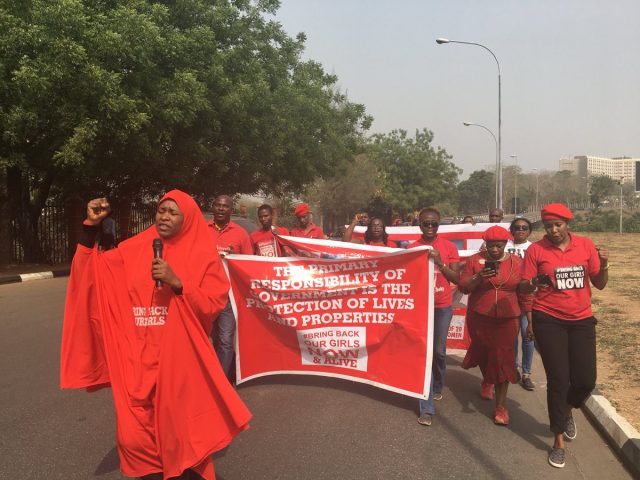 The Bring Back Our Girls (BBOG) Advocacy Group, has asked the federal government to stop the secret burial of soldiers killed on the battlefield.

In a statement signed by its leaders, Oby Ezekwesili, Aisha Yesufu and Florence Ozor, the group made this call while reacting to photos of mass burial of some fallen soldiers days after the Nigerian military denied its soldiers were attacked.

It was reported that the Nigerian military denied that about 23 soldiers and eight trucks went missing after the troops suffered an ambush attack by Boko Haram gunmen in Bama local government area of Borno State on July 16.

The attack which occurred three days earlier, was not made public by the military until the media published it.

A spokesperson for the Nigeria Army, Texas Chukwu, who confirmed the incident, had said it was “blown out of proportion by the media”.

In its statement, the BBOG, which has been championing the return of abducted Chibok schoolgirls since 2014 described the military’s denial as unfortunate.

“Were Nigerians not told that the military has won the war? What then is the reason for the escalation of attacks by the terrorists and the heightened loss of life of citizens and our soldiers?

“The #BringBackOurGirls Advocacy has been consistent in voicing the correlation between the wellbeing of our troops, the rescue of our #ChibokGirls and the end of the insurgency.

”It is therefore disheartening that several months after the federal government’s announcement that Boko Haram has been technically defeated, we see pictures of a mass burial for our troops, killed by Boko Haram,” part of the statement read.

”The Military Authority should immediately confirm the number of our soldiers that have died within this month of July 2018. Their families and Nigerians should have a brief on the circumstances of their deaths as a means to healing, to have closure. Their names should be released for proper honour as obtains in other climes.

”We take exception to what is to all intent, a secret burial of our fallen heroes. Those responsible for the safety of our troops should be sanctioned for this failure and measures must be put in place to prevent further deaths and damage to the morale of our troops. We question why the current status of our defence budget is at variance with the safety and wellbeing of our troops in this fight against Boko Haram.

”We still stand on the demand we have made previously, for the federal government to institute a monthly Counter-Terrorism Status Report to the Nigerian Public.”