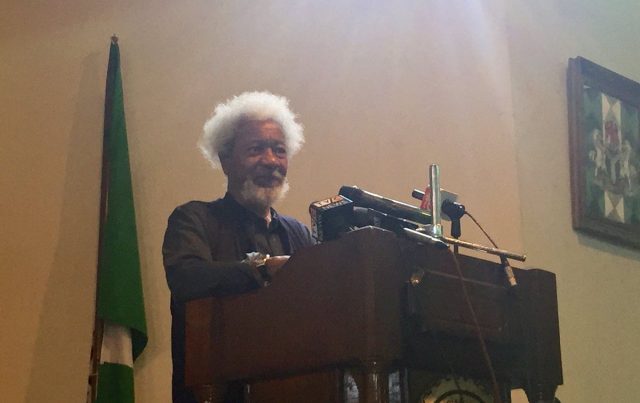 Soyinka spoke at a Colloquium in honour of the Executive Editor, The News/PM News, Kunle Ajibade who turned 60 two days ago.

The theme of the event is: “A Brighter Future for Nigeria and how to get there.”

He said he had believed that the Police were untouchable, but noted that he did not mean those collecting N100 forcefully from members of the public, but those at the helms of affairs of the Police Force.

“Among those that I believe were untouchable before were the Police but not those that were on the streets harassing and collecting money from people,” he said.

He said after the arrest and prosecution of the former Inspector General of Police, Tafa Balogun for corruption, having being exposed through in investigative story by Ajibade, he began to ask other questions as to who corrupted the Police.

“I know that of the Government institutions, the Police were often involved in profiling corrupt persons. But the questions that later baffle me was who then corrupted the Police? Who made sure that the agencies enforcing law were corrupt?

“And that was why when I met Ribadu after former IGP, Tafa Balogun was arrested, I emphasised that the job of fighting corruption doesn’t end with the person holding the money but also how he got the money or how the money got into his bank account. Does he engage in other businesses aside law enforcement? And where did the money come from?” He asked.

“If we can solve issues of corruption, we will also be addressing cases of election rigging. This is because there is a direct nexus between that level of corruption and the degradation of democratic process that we have witnessed in the country.

“If we had solved the cases properly, it would have helped curb corruption and solve the issue of democratic failure in Nigeria. I will only urge young journalist to emulate Ajibade’s tenacity. The number of journalists that were killed while engaging in investigative journalism were more than those that died on the battlefield.”