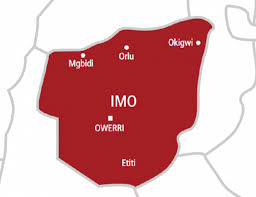 About three persons were feared killed on Sunday at Okporo community in Orlu Local Government Area of Imo State.

Several houses were also burnt while the head of an unidentified was severed from his trunk and placed on the road.

There was also shooting during the stampede and destruction that started early hours of Sunday.

The residents said no group has claimed responsibility for the attack that caused monumental damages to several properties, including motor bikes, vehicles including a trailer conveying Guinness lager beer to an unknown destination.

Okporo-Nnepi Orlu has been embroiled in crisis since last week when some bandits engaged police men in gun battle that claimed more than six bandits including that of a Divisional Police Officer (DPO), CSP Fatmann Dooiyor.

The incident led to the closure of the timber and building materials market by the traders in solidarity with the leader of Indigenous People of Biafra (IPOB), Nnamdi Kànu whose trial was to commence on Monday, July 26 but was later adjourned.

Soldiers were drafted to take over the market believed to have been used as a shield by the bandits during the attack.