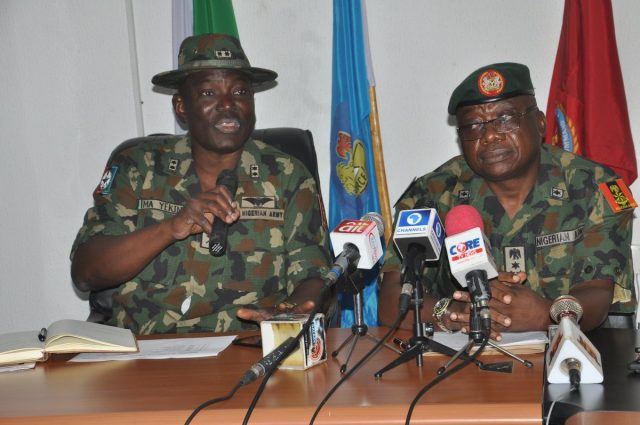 The Defence Headquarters has said 35 militia herdsmen have been killed, while one soldiers paid the supreme price and another one missing in the “Operation Whirl Stroke (OPWS)’’ in Benue, Nasarawa, Taraba and Zamfara states.

John Agim, the Acting Director Defence Information (DDI) stated this in a statement on Monday.

Agim said that the success was recorded in a four-pronged clearance operation at the weekend.

According to him,  two personnel sustained minor injuries in the operations.

Giving further update on the operation, Agim said that at Umaisha and Toto Villages in Nasarawa State, troops ambushed the militia following a tip off of a planned attack on the two villages.

The DDI also said that one Musa Habu aged 32, was arrested at Kolo close to Umiasha in Toto Local Government Council.

Items recovered from the suspect, he said were one locally made pistol, two cartridges, one Techno handset and N130 only.

“Preliminary investigation revealed that the suspect is linked with some suspected militia in the locality.

“The suspect has been handed over to the DSS for further necessary action,’’ he said.

The DDI said that another suspected militia herdsman, Abdullahi Adamu, was arrested at Rukubi in Doma Local Government Area of the state.

He said that the suspect was found to be in possession of an ID card of the vigilante group of Nigeria, Nasarawa State command and “a photograph in which he posed with an AK47 rifle.’’

According to him, the suspect is under interrogation and will be handed over to the Police for prosecution after preliminary investigation.

At Gwer West, Logo and Guma Local Government Areas of Benue, Agim said troops had contact with heavily armed herdsmen around lower Benue and a militia camp at chetarer village.

He said that the troops engaged and pursued them with the M135 Helicopter, leading to the killing of a large number of the militias.

At Sector 3 in Taraba, Agim said troops on patrol through Kwesati, Manya- Garagun axis made encountered eight bandits, who were arrested with two AK47 rifle, one K2 rifle and two locally made gun.

“Ammunitions recovered from them include 56 rounds of 7.6mm, 25 rounds of k2, three cartridge, charms, phones amongst other items.’’

He also said that the suspects and items had been handed over to SSS for further investigation.