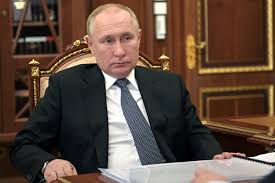 Russian President Vladimir Putin is being misled by advisers who are too scared to tell him how badly the war in Ukraine is going, the White House says.

Meanwhile, according to BBC, British intelligence says Russian troops in Ukraine are demoralised, short of equipment and refusing to carry out orders.

Mr Putin is also not being told about the full impact of sanctions on the Russian economy, the White House said.

The Kremlin has not yet commented on the assessments.

White House spokesperson Kate Bedingfield said the US had information that Mr Putin “felt misled by the Russian military” and this had resulted in “persistent tension between Putin and his military leadership”.

“Putin’s war has been a strategic blunder that has left Russia weaker over the long term and increasingly isolated on the world stage,” she said.

Pentagon spokesman John Kirby called the assessments “discomforting” because an uninformed Putin could result in a “less than faithful” effort at ending the conflict through peace negotiations.

“The other thing is, you don’t know how a leader like that is going to react to getting bad news,” he said.