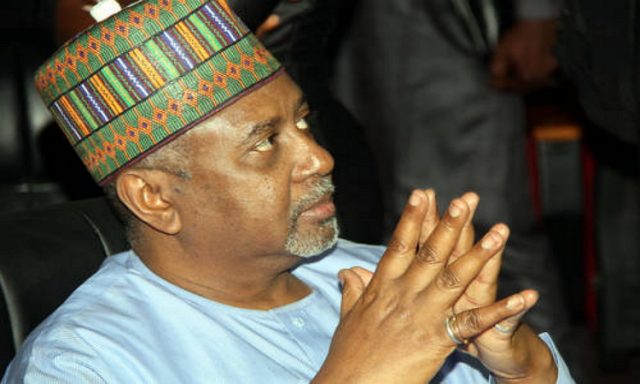 Department of State Service (DSS), on Tuesday narrated before the Federal High Court in Abuja, how it recovered $20,000 and N5 million the former National Security Adviser (NSA), Sambo Dasuki, hidden inside a Range Rover packed inside his Abuja residence.
The agency also told the court that its operatives recovered from the parked vehicle with Abuja registration No, RBC-517-JN, one Macro Uzi gun with serial No- 60244 and one magazine with 16 rounds of live 9MM ammunition.

A member of the DSS team that raided the home of the former NSA on July 16, 2015, William Obiora, testified before the court as the first prosecution witness, PW-1.

The PW-1, who wore mask and testified behind a screen, told the court that aside 11 exotic cars, arms and ammunition his team recovered during the search operation, $40,000 was found inside a safe in Dasuki’s bedroom.

The witness said his team were initially prevented by armed soldiers from entering Dasuki’s home.

“We commenced the operation in July 16, 2015. We arrived the defendant’s residence around 4:30pm or thereabout.

“We met armed soldiers at his residence, who did not give us access to the compound or to the owner of the house. Our effort to convince them with our duly signed search warrant did not yield any result.

“This effort was on, up till 1:30 am of July 17 when a military bus came and the soldiers entered the vehicle and left.

“It was after the operation that these items were recorded. The defendant was with us while the search operation was going on. We firstly presented ourselves to him to be searched. The essence was to avoid being accused of bringing in incriminating items into his residence. The defendant corporated with us.”

Among 30 exbihits on the list of recovered items the witness presented before the court included 36 rounds of live 9mm ammunition, three booklets of firearm license, a compact disc containing video of Boko Haram members slaughtering people, 8GB flash drive, three Barclay’s Bank drafts on investment credited to one A. I. Dasuki and three unmarked CDs.

The witness, who was led in evidence by the prosecuting counsel, Okpeseyi Oladipupo told the court that all the recovered items were endorsed behind the search warrant.

He said the ex-NSA, one Bello Fadile, who was in his house when the operation was carried out, and the DSS team leader, signed and counter-signed on the back of the warrant.

Meanwhile, the trial Justice, Ahmed Mohammed adjourned the case till June 25 to enable Dasuki’s lawyer, J. B. Daudu to cross-examine the witness.

FG had in the charge before the court, alleged that Dasuki was on July 17, 2015, at his house situated at No. 13, John Khadiya Street, Asokoro, Abuja, found to be in possession of various range of firearms without requisite license, an offence punishable under section 27 (1)(a) of the Firearms Act Cap F28 LFN 2004.

FG further alleged that the ex-NSA had on July 16, 2015, at his residence at Sultan Abubakar Road and Sabon Birni Road, Sokoto State, retained another $150,000 and N37.6m being part of proceedings of unlawful act, contrary to Section 15 (3) of the Money Laundering Act 2011.