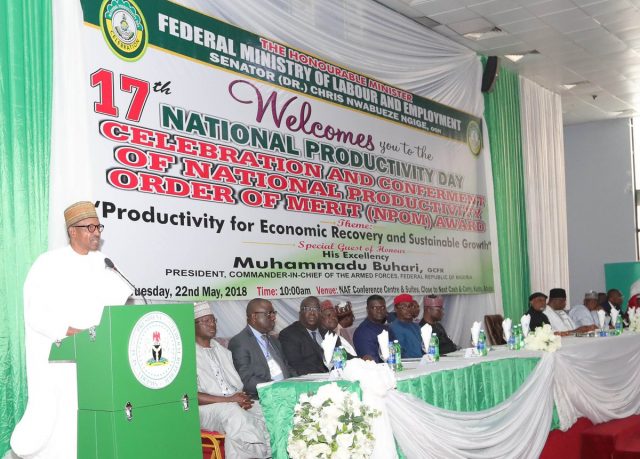 Muhammadu Buhari, the President  of Nigeria on Tuesday said that the implementation of the Treasury Single Account (TSA) had stopped the pilfering of the country’s treasury with billions of naira saved from maintenance fees payable to banks.

He added that N200 billion had been saved from the elimination of ghost workers from the public service, just as his administration had made steady progress in its economic diversification drive especially in agriculture and mining.

Buhari, who reiterated his administration’s commitment to moving the country forward, said that doing so would help position the country as a force to reckon with globally.

“The goal of this administration is to move Nigeria forward to become a strong, strategic and proactive state through a deliberate, pragmatic and productivity-conscious programme of action.

“We want to build Nigeria into a competitive, virile, strong and productive economy; a State, whose citizens are creative, innovative, responsive, accountable, incorruptible, patriotic and diligent.”

The President, who also underscored the importance of the public service, said “it is the vehicle through which governmental policies are transmitted’’.

According to him, the public service as the organ of government responsible for the formulation and implementation of government policies, has a critical role to play in this new dispensation.

“It is my intention to hold the public servants collectively and individually responsible for the planning and implementation of the programmes of this administration.

“From now on, it will no longer be “business as usual”. Excellence will be rewarded and mediocrity will not be tolerated.

“In this regard, I am directing all Ministries, Departments and Agencies to drive the Change Agenda in the public sector,’’ he added.

He said that the National Productivity Centre should be encouraged to carry out its mandate in order to ensure a productive country.

According to him, corruption is an anathema to the growth of any economy.

“We must leave no stone unturned in tackling the monster. Corruption is dangerous and cancerous to the country.

“We are, therefore, resolute in our commitment to fight it in all facets of our national life.’’

The President stated that his administration was committed to rewarding hardwork and excellence.

He said it was in line with this that his administration had placed a great premium on the National Productivity Order of Merit Award as a decoration of honour and dignity.

“We have, therefore, been consistent in the yearly conferment of the award on deserving Nigerians and organisations,’’ he said.

He maintained that the government had approved the conferment of the National Productivity Order of Merit Award for 2018 on a few individuals and organisations, ”who had been adjudged to have performed exceedingly well in their various endeavours”.

The President congratulated the awardees for their remarkable feats and expressed the hope that the awards would propel and motivate them for greater achievements.

In his remarks, the Minister of Labour and Employment, Chris Ngige, revealed that 327 Nigerians and 800 organisations had so far benefited from the NPOM award.

According to him, the National Productivity Order of Merit Award is not `cash and carry’ award as only deserving citizens and productive organisations with track records benefit from it.

The Chairperson, Board of Directors, First Bank of Nigeria, Ibukun Awosika, delivered the Award lecture at the event, while 15 persons and five organisations received the NPOM award.