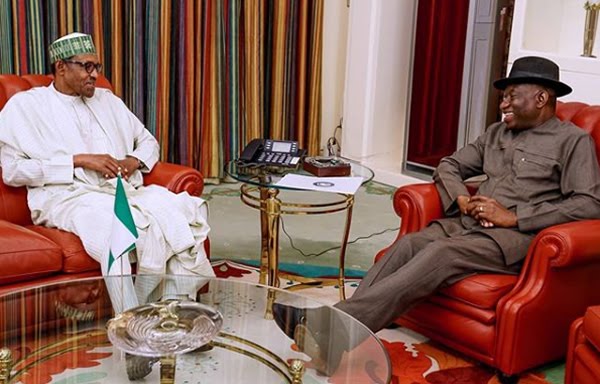 It was reported on Sunday, that an unnamed ‘top Presidency Official’ told Journalists in Abuja, that the government of former President, Goodluck Jonathan, signed the power agreement with Azura, to generate 450MW of electricity in Nigeria.

The unnamed Official, who did not want to be identified, said that this was because the Power Purchase Agreement, PPA, became ‘operational’ in April 2013, before the President Muhammadu Buhari administration came to power.

The claims by the “top Official” at the Presidency, were published in a number of Nigeria’s leading newspapers, including Punch and This day, but Not Page 36.

According to newspaper reports, the Presidency Official said that “records show that the Power Purchase Agreement for the transaction in question was signed on April 22, 2013, during the tenure of Mr. Jonathan”.

He added that ‘top Federal Government Officials’ would be communicating with the Senate, to clarify this misconception.

The claims were made in reaction to the call by the Senate, asking the Federal Government to pull out of its PPA with Azura Power Plant, and allow the company to pull $1.2 billion from the foreign reserves.

The Senate Committee on Power, in its report presented by its Chairman, Gabriel Suswam, had last week, described the agreement as a drain on the country’s treasury, and called for its immediate termination.

It was gathered that Azura Power deal had many phases, the preliminary parts of which the government of Jonathan initiated and signed.

This was also confirmed by the “Presidency source”, in the claims made on Sunday.

In October 2014, the Jonathan government also signed the Put Call Option Agreement, PCOA, executed in December of that year.

However, documents showed that the entire Power agreement could not be completed under the Jonathan Presidency, because the then Attorney-General of the Federation. AGF, Mohammed Adoke, objected to the content of the PCOA.

In letters written to Jonathan and Ngozi Okonjo-Iweala, the then Minister of Finance, Adoke declined to give legal assent to the PCOA deal.

He argued that it was injurious to the interest of Nigeria, and that a sovereign guarantee would put the nation’s foreign assets at grave risk.

He also raised concerns about a number of “provisions which have to be reviewed, because of the financial obligation that government may have to bear, if the agreement is enforced”.

He however, told Jonathan that he was unable to reply Mrs. Okonjo-Iweala, because the PCOA was executed without due regards to his legal opinion of July, among other reasons.

Adoke said that, for one, no significant change was made to his recommendation on a number of clauses, adding that, in the PCOA, radioactive contamination was not treated as a local political force majeure event, but still attracted the Buyer Default Purchase Price.

Also, Adoke maintained that his counsel that clause 13.1.2 of the PCOA should be deleted, was ignored.

The clause, he explained, provides that the Nigerian government irrevocably waives its immunity over its assets or revenue from suits, execution, attachment, or other legal processes.

He finally advised Jonathan to direct Mrs. Okonjo-Iweala to effect the recommendations to make the PCOA compliant with “extant laws, policies, and circulars of government”.

However, investigations revealed that the Power deal remained at this stage until the expiration of Jonathan’s tenure, despite pressure from Officials of the government to have the final phase of the deal completed.

These instruments were not signed until Jonathan left Office in May 2015, effectively rendering the agreement inconclusive and inactive.

On May 29, 2015, Buhari was sworn in as President, after he defeated Jonathan in a fiercely contested Presidential election.

It was learnt that shortly after the new government came in to power, there was pressure on the Nigerian government to assent to the guarantee instruments.

However, Buhari did not appoint Ministers into the various Ministries until November 2015, and no adjustment was made to the PCOA as recommended by the immediate-past Attorney-General.

It was reported that: “Parties to the agreement included the Federal Government, represented by the Ministry of Finance and Nigerian Bulk Electricity Trading Plc, NBET; the World Bank in its role as the provider of the guarantees; the project sponsors represented by Azura Power West Africa Ltd (Azura); and various Lenders represented by JP Morgan, Standard Chartered Bank, Rand Merchant Bank, Standard Bank; and Siemens Bank.”

Similarly, a copy of the indemnity agreement dated August 21, 2015, showed that signatories to the agreement included Anastasia Mabi Daniel-Nwaobia, Permanent Secretary of the Federal Ministry of Finance, and Indira Konjhodzic, IBRD’s Acting Country Director for Nigeria.

Based on these findings, the claim by the Presidency that the Azura Power deal was signed by the Jonathan government, and not Buhari’s, is reportedly FALSE.

The Senate Committee, headed by Suswam, confirmed this in its presentation last week.

The activation of the guarantee instrument at the final phase of the Power deal, was signed on August 21, 2015, 3 months after the Buhari government was inaugurated on May 29, 2015.

In effect, the Buhari government signed the Azura Power deal, it has now been concluded.