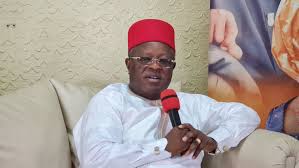 He made this remark while speaking with newsmen in Abakaliki, shortly after the State Executive Council meeting.

According to him, the legislative assembly e led by Mr. Francis Nwifuru, approved the N10bn on loan to enable the state government purchase all the equipment that will be used in the completion of the President Muhammadu Buhari international Airport.

He said, “This loan is N10bn, which we are working with UBA to secure. And from the arrangement, it’s going to be a term loan with a 12 per cent interest rate. The good news is that we are very sure that we have got lots of grants coming.”

In another development, the state government has issued an executive order banning the indiscriminate pasting of papers, posters, banners and erection of billboards within the state capital.

He said: “Executive Order on indiscriminate pasting of papers, posters, banners, and erection of billboards within the state was signed by His Excellency the Governor in EXCO. The EXCO noted that the Executive Order is a good omen that will enhance the status of the State as having one of the neatest capital cities in Nigeria.”