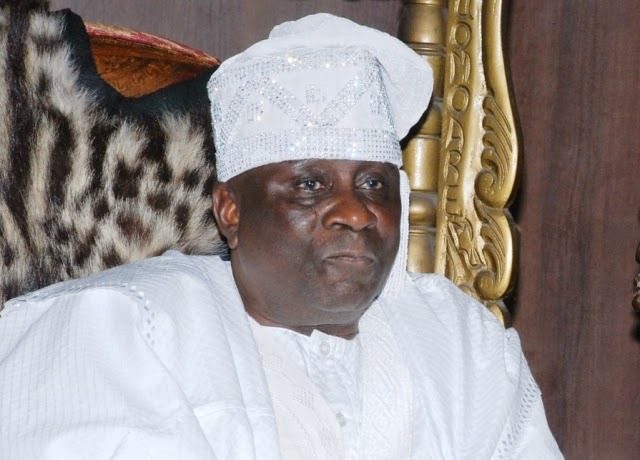 The Lagos State House of Assembly on Thursday commended the efforts of the Oba of Lagos, Rilwanu Akiolu, toward the development of the state.

The lawmakers eulogised the monarch on the 15th Anniversary of his coronation, saying his fatherly role was helpful in achieving progress in the state.

The lawmakers praised Akiolu on the floor of the House, following a matter of public importance raised by Lanre Ogunyemi, Chairman, House Ad hoc Committee on Education.

Ogunyemi commended the efforts of the traditional ruler toward various developments in the state.

According to him, Akiolu has greatly promoted cultural values in the state.

“I stand to congratulate the royal father, who has unrelentlessly played major roles in enhancing security in the state, who is also a courageous king,” Ogunyemi said.

In his contribution, Tunde Braimoh, Chairman, House Ad hoc Committee on Information and Strategy, described the monarch as “a blessed king who has brought immense blessings to the state to a great extent.”

“Before he was enthroned as Eleko, population of Lagos was nine million and now it has increased to 22 million.

“This is a part of the blessings enjoyed in Lagos through the fortune of the king and this a commendable achievement,” he said.

“We can see that his reign is characterised with peace and stability,” he said.

The Majority Leader of the House, Sanai Agunbiade, urged Nigerians, especially other royal fathers to emulate Akiolu’s generosity to the masses.

The Deputy Speaker, Wasiu Esinlokun-Sanni, who prayed for long life for the monarch, said Akiolu would never be forgotten in the history of the state in terms of growth and development.

In his contribution, the Speaker of the House,Mudashiru Obasa, said: “He (Akiolu) has been playing a fatherly role which has been helpful in various ways.

“When we have any issue in the House, we do contact him for advice and he has always been there.

“He is a great traditional ruler and a father indeed.”

Obasa, therefore, directed the Clerk of the House, Azeez Sanni, to write a congratulatory letter to the paramount ruler on behalf of the House.