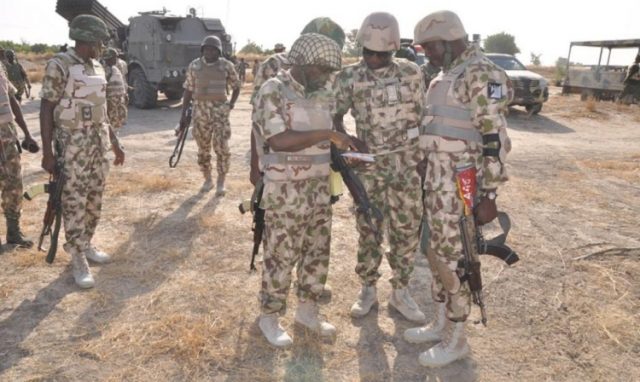 The Nigerian Army has killed 68 bandits, arrested six suspected kidnappers and recovered 17 motorcycles in Zamfara from April to date.

The Brigade Commander, 1 Army Brigade Command Sokoto, Udeagbala Kennedy disclosed this while handing over the six suspected kidnappers to the state Commissioner of Police, Kenneth Ebrimson at the State Police headquarters in Gusau on Tuesday.

He recalled bandits attacked in Birane and Bawar-Daji villages in Anka and Zurmi Local Government Areas (LGAs) of the state in February and April which led to the death of 64 people.

“The Nigerian Army and other security agencies commenced clearance operation to rid out all the bandits and curtail the banditry activities in the state.

“Today military and other security agencies were able to carry out successful operation in all nooks and crannies of the state which led to the success recorded.

He said during the period, a number of casualties on banditry activities were recorded. A total 68 bandits were killed between the first week of April to date and unfortunately it lost two of  its men – Muhammad, a Captain and  Mijinyawa, a Private.

“Apart from the 17 recovered motorcycles from the killed and fleeing bandits, we also apprehended six suspected kidnappers and one-gun runner.

“I am directed by the Army headquarters to hand over the suspects and the motorcycles to the state Commissioner of Police and Director, Department of State Service (DSS) for further investigation and I hope these activities will lead to the arrest of their colleagues,” he added.

Responding, Ebrimson attributed the successes recorded to collaborative efforts among all the security agencies in fighting insecurity in the state.

He assured residents that security agencies would continue to do their best to ensure that they fish out kidnappers, cattle rustlers and all other criminals in order to maintain peace and stability in the state.

The CP appealed to communities to always cooperate and give information to security agencies in order to take appreciate security measures.